I dip my toes into Hungarian wine

My intrepid WSET study group has made it through France––finally––and before we get into the Spanish and Italian regions we all know and love, it’s time for a country whose wines we know almost nothing about: Hungary. My experience with Hungarian wine has thus far been limited to the odd sweet Tokaji, which is almost impossible to avoid when you hang out with geeks in ice wine country. 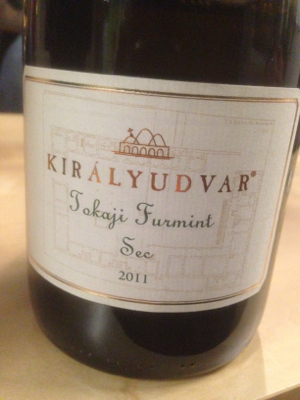 A friend of mine recently traveled to Hungary on a wine business trip and reported being thoroughly impressed by everything he tasted. After enjoying an incredible sparkling wine and dry white, a fascinating red, and a really wonderful dessert wine over the course of a single evening, with not a single bottle unenjoyable (at least for me), I can see why so many of my wine industry friends are saying Hungary is one of the most exciting up-and-coming wine regions in the world.

We suspected a dearth of options here in Madison, but we actually found a surprising variety––though three were from the same producer, a biodynamic farm called Királyudvar. We began with a Tokaji Pezsgo 2009, an incredible sparkling wine that I’d drink again and again; its apple and mineral notes recalled a very high-end sparkling Riesling. The same producer offered a Tokaji Furmint Sec 2011, which carried an aroma my friend Joseph dubbed “clean barn.”

The red, from Pfneizsl (I’m thrilled to not have to pronounce these for everyone, but I apologize in advance to those reading this with a screen reader not versed in Hungarian), was easily the most polarizing wine we’ve enjoyed as a group. I thought it tasted like the kind of marquette I’d like to make––meaty, weird, but clean and cool-climate with some pyrazine and dirt running alongside bright red fruit. For about half of us it was everything wrong with red wine; I’d seek it out again to pour for my friends growing baco noir and other hybrids in New York State.

My friend Barbara is of Hungarian descent, and was kind enough to help us with the thoroughly intimidating word for “cheers”: egészségedre. If I felt confident pronouncing this word sober, I’d say it now in congratulations to the producers making fascinatingly rich wines in this little-known region.