A first encounter with liatiko

I taught a class on Greek wine the other night with a plan to introduce my students to some of the fascinating native grapes that make Greece so cool. Naturally, I had moschofilero, xinomavro, and assyrtiko on the short list. But a supplier I work with suggested an addition: A wine made from 100% liatiko from the island of Crete, produced by Douloufakis. I wasn’t familiar with the producer, but now I’m on a hunt to track down everything they make, because I never thought I’d use the word “Burgundian” on a Greek wine until I tried this one. 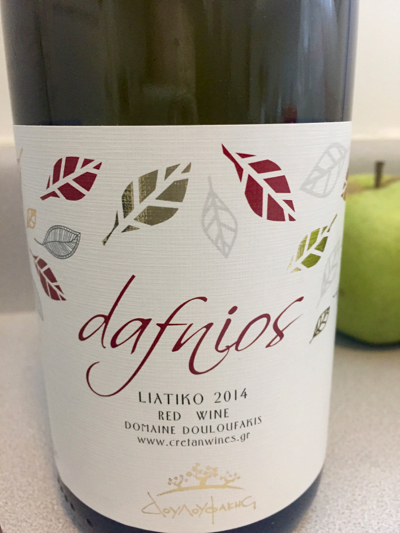 The Douloufakis family has been producing wines in Crete since 1930. Their vineyards, which reach up to 1800 feet in elevation, are certified organic and planted to a mixture of indigenous varieties and internationals. In mountainous Crete, high-altitude and steeply sloped vineyards are the norm, and for a region that has only been involved in modern winemaking since the 1970s it is producing some really amazing quality, especially as producers become more confident offering local varieties instead of simply relying on the familiarity of cab and merlot.

Crete’s cool, high sites and limestone and marl soils seem perfectly suited to reds that show incredible elegance and delicacy: this liatiko is more lightweight than many Greek reds, but boasts beautiful acidity, healthy tannins, and a long finish that gains momentum with savory garrigue notes and red fruits. I was amazed to learn that liatiko isn’t a popular grape for dry reds; apparently it usually disappears into inexpensive sweet wines. It’s clear that in the hands of winemaker Nikolas Douloufakis the grape has potential for real excitement: My students were so taken with this wine that they’re demanding I bring it into the shop!