I’d never tried any of Bartinney’s wines before, but I’ve seen its name pop up regularly in South African wine news. 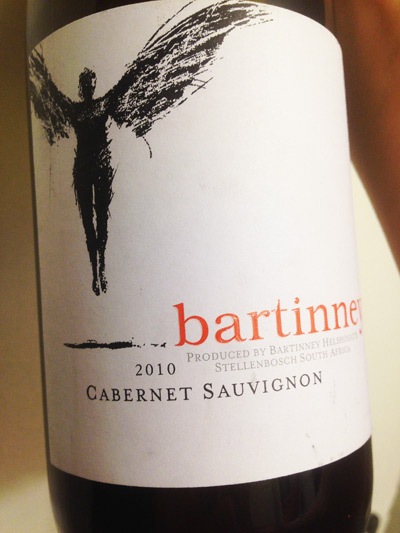 The farm has received positive press for both its out-of-the-gate chardonnay and its environmental efforts since husband-and-wife team Michael and Rose Jordaan purchased the land on Helshoogte (“Hell’s Heights”) Pass in Stellenbosch in 2006, and began releasing estate wines with the 2009 vintage. The good press now includes four Platter stars for this cab made by winemaker Ronell Wild, a former geologist who has previously worked at Hazendal and Boschendal estates.

The fruit for this wine is picked from eight separate blocks on red, decomposed granite soils. Each is vinified separately, with a one-month extended maceration, then aged 18 months in 30 percent new and 70 percent second-fill oak.

The small-but-powerful 2010 crop shows itself off here. The nose is dusky, with blackberry and ash in abundance and sumptuous tannins. The fruit is sharp and focused, knotting like a fiddlehead on the palate, dotted with just flecks of warm spice cake. It pushes just to the brink of excess fruit, of lasciviousness, pulling back at the last second like the early stages of a workplace romance. A little mint, Stellenbosch cab’s signature flourish, leaves a twist on the finish.

I am always excited to see female winemakers excel, and this bottle indicates an exciting future for a farm with a strong winemaker and what appears to be a fantastic site.