While considering marginal-climate winemaking this weekend as I study for the ever-more-largely-looming Master of Wine Stage One Assessment, I remembered a chat I had with Niagara Escarpment grower Don DeMaison years ago in which he described his dramatic transition from growing hybrid grapes to vinifera. 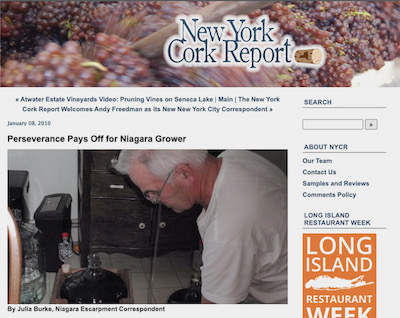 (Back then, phone pics looked like… that. Blogging was rough.)

Writing for New York Cork Report, I often saw growers and producers stake their faith in the future of the Niagara region by planting vinifera. They felt strongly that Pinot Noir, Cabernet Franc, and in Don’s case even Sauvignon Blanc were the future of the Niagara region in New York, and so did I. Hybrids, on the other hand, had champions like Jonathan Oakes making compelling wines from grapes most consumers had never heard of. This being a small, nascent region with few outside advocates and only a handful of passionate winemakers in its ranks, both sides were underdogs.

It’s been amazing reading the recent crop of articles cheering on hybrids (here are takes by Elaine Chukan Brown, paywalled, and Kathleen Willcox if you missed their excellent pieces). And if I’m honest, it’s a bit like when the band you saw in someone’s basement in 2008 now has a Top 40 hit (“Chelois! I know them!!!”). It’s also a bit like when you grew up getting made fun of for something and now that thing is trendy. But I’m happy for hybrids, I still love them, and lord knows we need to be talking about them as we scramble to face the effects of climate change. It made me smile to look back on this 12-year-old piece, and this sweet man, who was never too busy to explain viticulture to me back when I worked at the winery down the road. (Don’s hard work is now Long Cliff Winery.)

I haven’t lived there for years, but I like to imagine a future where Niagara holds onto both dreams: a brilliant selection of beloved noble grapes made to stand up to the world’s best examples, and a fierce passion for the characterful and often amazing hybrids that somehow seem equally at home in the very same place. You’ve gotta play the hits, but if you can bring your audience somewhere new because they trust you enough to follow, I think you should. I’ll be watching the growing interest in hybrids with curiosity—and hoping we can talk consumers into falling in love with them as so many producers have.

Julia Burke is a wine educator and writer.