What is the equivalent of a Burgundian climat on the Etna?

With my WSET Diploma Unit 3 exam looming in the not-so-distant future, I’ve been practicing writing essays on a variety of wine industry topics, and friends suggested I post them here. My friend Julien Marchand had a few excellent prompts.

It was a happy coincidence that I received this question only a few days after talking with a supplier about an Etna wine in his portfolio that really is quite Burgundian in style. The similarities and differences between the Sicilian wine region of Etna and the great French region of Burgundy make for excellent studying material, as they’ve been noted at length but not necessarily explained to my satisfaction. 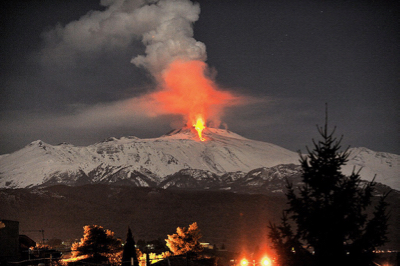 A climat, for starters, is a single-vineyard site in Burgundy. One look at a wine map of Etna, the region surrounding an active volcano in eastern Sicily, and it’s easy to see why Etna winemakers would look to Burgundy for inspiration: the wine communes, subdivided into contrade, form a ring to the east around what looks like a spiderweb of topography with the volcano at the center. It’s the sort of thing a soil nerd could really sink their teeth into.

A bit about Etna: While most of Sicily is warm enough that irrigation is mandatory, the mountains, including Etna, are often snow-capped. Etna’s northeastern situation is the closest Sicilian vineyards get to “cool-climate,” with grapes growing at up to 1,000 meters (3,000 feet) on the mountain’s slopes. Etna “has become a magnet for terroir-conscious wine producers in much the same way that Burgundy is,” Jancis Robinson writes in The World Atlas of Wine, attributing this interest to the mountain’s incredibly diverse soil types, altitudes, and exposures where terroir-driven winemakers can find pockets of fascinating potential.

While Burgundy’s iconic red grape is pinot noir, Etna has its own signature light-bodied indigenous variety in nerello mascalese. Ancient vines (over 100 years old) are a major aspect of Etna’s charm, as are the varieties and quality of lava on different sites, where soils can include pomace, black ash, and basalt and even change with the volcano’s occasional mild eruptions. The mineral richness of the otherwise sandy soil contributes to wines that are fresh, balanced, and high-acid, in contrast to the more robust and occasionally sappy nero d’avola found elsewhere in Sicily.

The similarities between nerello mascalese and pinot noir are fairly numerous––they both have a lightness in color that can belie tremendous complexity; both are high-acid and can show beautiful minerality as well as a rustic, earthy note; both can drink young or age well. They’re not identical: Nerello mascalese is a late-ripener with more tannin that can feel closer to nebbiolo in structure. But it’s also, like pinot, a bit less immediately appealing to consumers than another of its countrymen, in this case the more chewy and friendly nerello cappuccio, often compared to merlot. The comparison between pinot noir and nerello mascalese, then, is as much philosophical as it is physical––which, to me, is a continuation of the comparison between Etna and Burgundy.

I think the reason for the frequent comparisons to Burgundy, more than anything, lies in the opportunity for terroir expression in a place that is anything but friendly to winemaking. While Etna may have the edge for the winemaker equivalent of thrill-seeking––it is, after all, an active volcano––it shares Burgundy’s sense of excitement and obsessive pursuit of terroir under tough growing conditions. Winemakers in both regions are frequently described as “intense,” and the current hunt for ever-more-unique sites and expressions of all the mountain’s various lava-bestowed soil deposits is an exciting one for both the producer and the consumer.

If I had to choose a contrada most likely to succeed as a Burgundy outpost, I might pick the Barbabecchi contrada in Solicchiata, where one of my favorite producers, Graci, farms a small vineyard. These high-elevation, ungrafted old vines produce delicate wallflower wines that become expressive with time and attention, showing earth and herb notes and a little dark red fruit thanks to some clay and iron in the sandy, sediment-rich soil. The complexity and grace is all Burgundy, though the structure, again, is unmistakably Etna.

I’m most familiar with the Guardiola contrada at the top of the Etna backwards-C curve; at about 800 meters above sea level it’s particularly high and cool. The volcanic soil is sandy and quite poor, with basalt pebbles and ash. Steep terraces make labor difficult, and yields are low. The wines are high acid with firm tannins and require a few years to open up; I’ve seen them compared to Barolo in this regard, another wine often compared to red Burgundy. However far one chooses to take the comparison, it’s clear Etna has much more personality to share with us as its wines become more available internationally and its contrade become more understood.