I’ve been looking forward to my wine study group’s South Africa tasting ever since we started. Not only did my awesome local wine shop bring in three wines from the Sadie Family Old Vine Series that I’ve never even seen before, but my friends had Vilafonté and Bayten by Buitenverwachting to share, because they’re awesome. 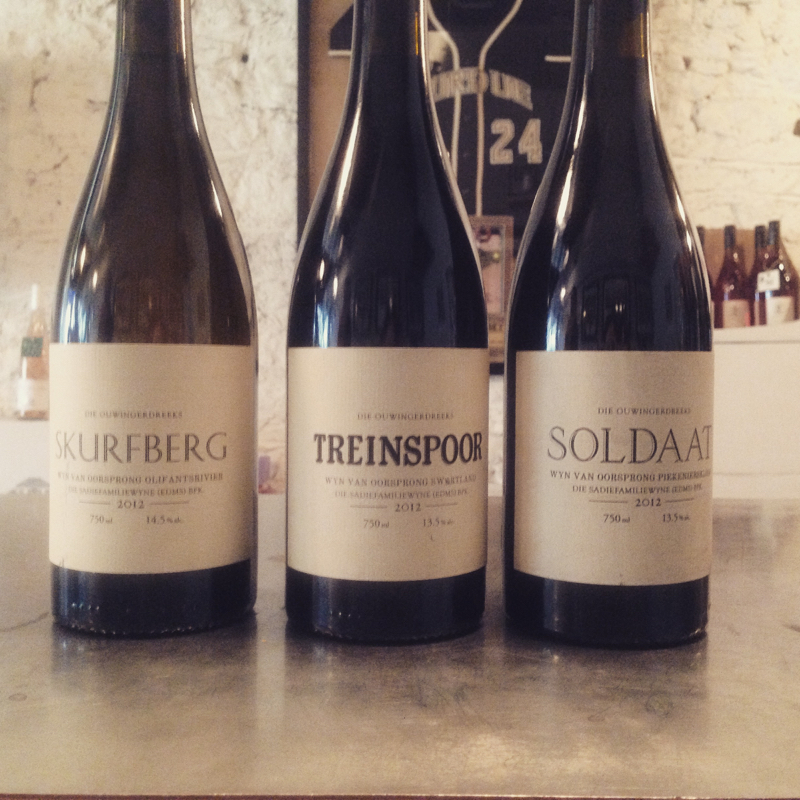 We started with the Sadie Family series, a rare treat for any American wine lover. The Skurfberg Olifants River 2012, a chenin blanc, benefitted from major decanting; it started out rubbery and aloof but opened into a cascade of quince and white pepper with vibrant mineral after a few hours. Next, we enjoyed one of my favorite sauvignon blancs available in the United States: Bayten by Buitenverwachting. The slight leesiness and texture (this wine sees a small amount of skin contact) along with jalapeño flavors and stone make for a quintessential Constantia sauvignon blanc experience. This was one of the wines of the night for just about everyone.

We moved onto the reds with two more very cool bottles from Sadie: Treinspoor, a single-varietal tinta barocca grown near Malmesbury in Swarltand, and Soldaat (grenache from the Citrusdal vineyard of Piekenierskloof). Both reminded me of sandstone––maybe firm cherry notes, or even orange, somehow giving me the color experience of that soil?––and had the controlled weirdness that I love about grapes like grignolino and liatiko. Soldaat came particularly recommended from Andrea at Square, and it is without doubt the best grenache I’ve ever had. I bought two bottles.

Naturally, we had a braai (grill-out) to accompany these wines, though the weather didn’t allow us to sit outside. Grapefruit-marinated shrimp, grilled eggplant, salad, meats, and veggie burgers (I’ve been leaning herbivorous these days) complimented the beefier wines to come.

The segue into the two vintages of Vilafonté from my friend Kate’s delightful cellar was abrupt, from sinewy and cerebral to all fruit and muscle. The 2004 series m was luscious and almost over-the-top by comparison to the previous wines, which made me sad that I wasn’t prepared to give it the proper environment. At eleven years old it was bursting with fruit and plush oak spice, more than held up by smooth tannins.

The stark transition prepared us for the 2005 series c, which I think each one of us considered stealing from the room for some alone time. It was the red showstopper we’d been waiting for, a tribute to cabernet and to South Africa in all its glory, half Left Bank and half Western Cape in personality. 2005 was a powerful vintage in SA as in Bordeaux, and this was just hitting its stride; the tannins were massive when I last tasted this vintage in 2010.

Wrapped up with a beautiful Madeira, this was one of my most memorable tastings in Madison.