The first of several posts on wine and music

I’ve made no secret of my affection for Beyoncé’s new album, a remarkable ode to love, marriage, sexuality, parenthood, feminism, and car partitions that plays on themes of sex and power, with Beyoncé’s trademark combination of vulnerability and bravado never more honest or captivating. My friend Lauren and I recently enjoyed the visual album over a bottle* of chenin from a producer I don’t see much here in the US. 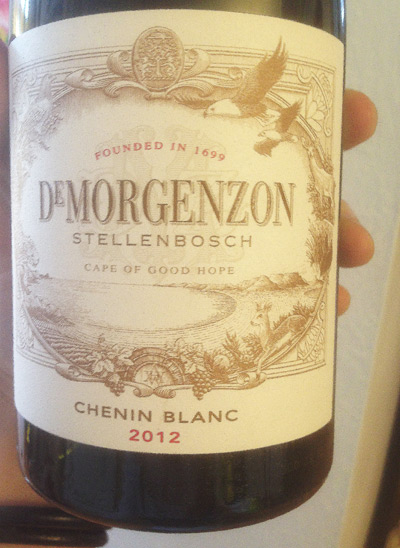 With an unassuming label and a slightly tough name for English speakers to pronounce. DeMorgenzon doesn’t jump off the shelf in American stores, but this farm’s wines are simply amazing and a steal at their asking prices. Their whites, in particular, are revelations, totally unforgettable in their elegance. You get the sense that this is where a chenin blanc or chardonnay grape might dream of ending up, if grapes happened to be self-aware.

DeMorgenzon is actually known for playing baroque music in their vineyards, but this wine sings on its own. Sultry but almost celestial in its weightlessness, it’s flint and stone on the nose and all fruit on palate, especially lime zest and grapefruit. “This is the Beyoncé wine!” Lauren declared.

In the song “Flawless,” Beyoncé combines samples from a TedX talk by Chimamanda Ngozi Adichie on feminism with a decision to love and accept herself exactly as she is––flawless––and inspire all women to do the same. Elegant, brilliant, but in no way overwrought or pretentious and on the contrary downright welcoming to the drinker, this chenin may or may not be “perfect” in the winemaking sense––I’m not a chemist––but it seems flawless to me.

*This wine was received as a sample.