Why is Sauvignon Blanc so popular?

With my WSET Diploma Unit 3 exam looming in the not-so-distant future, I’ve been practicing writing essays on a variety of wine industry topics. My friend Julien Marchand suggested I post them here, though he may be sorry.

Selling an affordable sauvignon blanc is like selling shade in the desert. Ask any wine retailer what product they simply can’t do without, and it’s guaranteed to make the short list, more so than any other white wine by a mile. New Zealand sauvignon blanc is the juggernaut, with brands like Whitehaven, Kim Crawford, Oyster Bay, and Cloudy Bay ubiquitous at stores and restaurants around the world, but hundreds of smaller brands like Sea Pearl and Momo dominate retail shelves and by-the-glass lists. 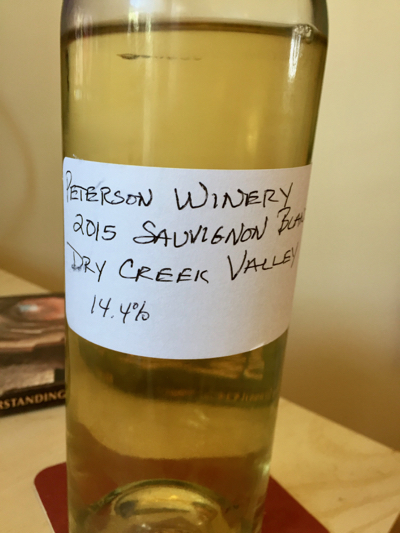 California sauvignon blanc, too, is becoming enormously popular, particularly from the larger brands that are able to offer affordable versions (such as Ferrari-Carano) rather than the beloved but expensive Napa or Sonoma bottlings. Sauvignon is huge in Chile and South Africa, too––not to mention its home country of France, where examples range from the inexpensive gluggers of Touraine to mineral-driven Sancerre. Then there are the northern Italian versions that range from crisp and clean to locker-room funky. Sauvignon blanc also plays the more internationally familiar role in white Bordeaux, sharing it with the more plump and less well-known Semillon.

Sauvignon blanc’s popularity with consumers is fairly easy to explain: it’s refreshing, zesty, and exciting, with tropical fruit and citrus notes, often beautiful minerality, a dose of bell pepper or even jalapeno, and that trademark searing acidity. In contrast to the buttery and overly oaked chardonnay, insipid pinot grigio, or sadly sweet blue-bottle riesling of days past, sauvignon blanc feels sophisticated and energetic, and its fresh acid makes it an excellent food companion. But sauvignon blanc is also just as happy as a porch pounder, broadening its appeal to both Americans (who still tend to view wine as alcohol rather than food, though that’s changing) and members of more food-centric wine cultures.

The grape’s popularity with producers can in part be explained by demand: it sells so reliably well that estates that have the ability to grow it would be foolish not to. Sauv blanc absolutely flourishes in Marlborough––suited perfectly to its cool climate and dry gravel soils, it’s currently making up nearly 60% of New Zealand’s total wine production. It also thrives in the cool regions of South Africa, such as Walker Bay and Constantia, where chalky minerality shows through as well as crunchy poblano notes. In France, flinty “silex” soils yield mineral-driven sauvignon blanc in the Loire (primarily Sancerre, the grape’s ancestral home) and the gravel soils of Graves allow the grape to add both its distinctive tropical fruit notes and mineral components to white Bordeaux wines.

The suitability of sauvignon blanc to this variety of terroirs and its reasonable hardiness mean it’s relatively inexpensive to produce. It helps that consumers usually expect sauvignon blanc to be fresh, young, and free of oak aging (though, chameleon that it is, it can handle a little oak action beautifully, as it does in the Peterson example from Dry Creek Valley pictured in barrel sample form at left). Considering that outstanding sauvignon blanc can now be found in Australia, Washington State, and Slovenia, to name just a few it’s also fair to say that sauvignon blanc grows reliably in so many different areas of the world that nearly everyone has a chance to get a piece of the market share.