This weekend I had the most wonderful experience! Having recently tasted a delicious chardonnay from Dombeya, a range of wines made at Haskell Vineyards in the Helderberg area about 10 minutes from Blaauwklippen, I was eager to taste more, and since their tastings are by appointment I emailed winemaker Rianie Strydom to set a time. She responded that she would be in the cellar on Saturday at 10 am for pumpovers, so I could come then. I finagled I ride from Albert and showed up shortly before 10 at Haskell’s gorgeous mountainside wine centre. 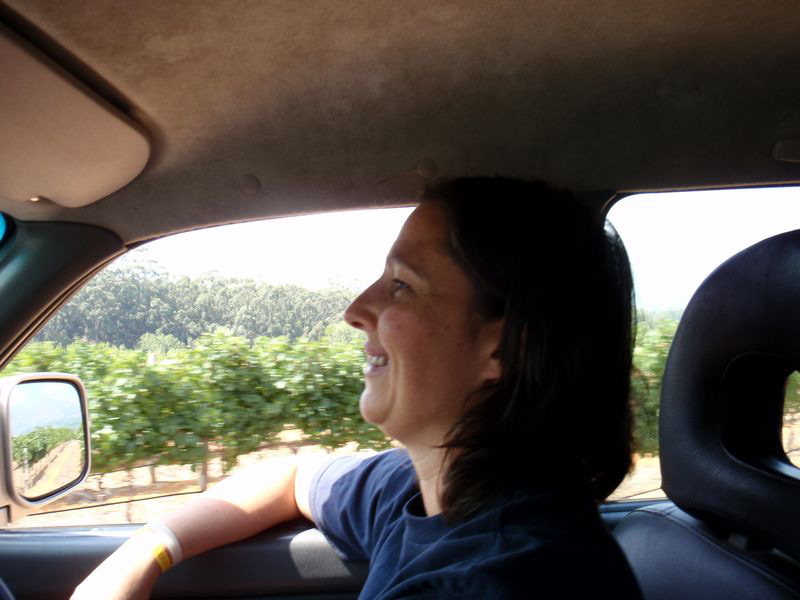 Though she’s a multi-award-winning winemaker and pretty much a rock star of the South African wine industry, Rianie gave me what I can only describe as the star treatment. We sat down together and tasted each wine as she explained to me why she had planted that particular grape, what went into making the wine, and what she learned from it. The wines are quite old-world in style with understated oak and natural-feeling acidity; the character of the fruit really comes through, but there’s also spices, chalk/pencil shavings, earthy/woodsy characters, mint, and all sorts of other cool flavors that make the wines worth savoring over a whole evening. Rianie explained that the “new world” characteristics of high alcohol, rich chocolatey flavors, and over-the-top, melt-your-panties tannins just aren’t her style, and it’s clear she’s in her element making wines with subtle, dignified elegance.

Rianie’s husband Louis Strydom, winemaker at Ernie Els and former winemaker for Rust en Vrede, showed up as we were finishing our tasting and joined us for some tank samples – looks as though the 2010 cabernet and shiraz harvest is especially promising. Tasting the wine in various stages of fermentation and from different vineyards was a real treat; Rianie explained the difference between the northern Simonsberg vineyards, which are more French in style, with the more new-worldy Helderberg vineyards and it was fascinating to compare the juice from the two regions side by side.

I got to taste that delicious chardonnay again and learn more about the wine that put Dombeya on my radar. The first thing I notice about it is what it’s not: the golden-yellow butter-tastic oak bomb that is all too common in warm weather wine regions. This chard has a gorgeous light honeysuckle color with a hint of green, exceptionally clear and delicate to the eye. It’s also not a tartaric acid cocktail like so many of the whites I’ve had here; the acidity tastes so natural and so beautifully incorporated that I immediately asked Rianie about it. She explained that after aging the 2008 vintage on lees for ten months, she picked some of her 2009 chardonnay relatively early (about 17 Balling) and blended 10% into the 2008 just before bottling, giving it a natural, balanced acid structure.

Dombeya wines aren’t the 15%-plus booze bombs that many associate with warm weather wine. In addition to vigilant vineyard practices and a picking schedule that ensures no overripe fruit, one of Rianie’s strategies for controlling alcohol is open-top fermentations. “The alcohol blows off nicely,” she explained, and I could actually smell it while punching down the cap. She also works frequently with whole-berry fermentation which results in minimal skin contact, smoother tannins, good concentration and a juicier, more fruit-forward flavor. When I tasted juice from tanks in which the berries were crushed after tasting juice from the whole-berry ferments, the difference was obvious: the crushed juice had a more extracted, tannic character and was almost over-the-top after the subtle whole-berry juice. Of all the tank samples I tasted, the shiraz and cab sauv were the most exciting, already showing great complexity on the nose and beautiful tannic structure.

At this point we had worked up an appetite. After a delicious lunch of nachos and Tokara ‘08 Elgin Sauvignon Blanc at the Buena Vista Social Club Café in Somerset West, the three of us headed to Ernie Els for Louis’s afternoon round of pumpovers and punchdowns. Always a fan of punchdowns, I offered to help out a bit while I picked the two winemakers’ brains. It’s quite a transition from Dombeya’s understated style to the robust, massive blends of Ernie Els, but Louis treated me to some outstanding tank and barrel samples – a backstage pass to the making of the phenomenal Ernie Els wines I tasted a few weeks back.

We said goodbye to Louis and headed back to Dombeya, where it was time for afternoon pumpovers. I gave Rianie a hand and got to smell a gorgeous tank of cab sauv in the process – it had amazing flavors! Judging from what I’ve tasted at Dombeya, Ernie Els, and Blaauwklippen, it looks like 2010 could be a very exciting year for cab sauv.

I left Dombeya grinning like a kid on Christmas morning. Rianie sent me home with some fantastic wine including my three favorites: the gorgeous 2008 Chardonnay, the peppery 2007 Boulder Road Shiraz, and the 2005 Samara, which is a blend of cab sauv, merlot and malbec and shows amazing cassis, anise, and lead pencil – very French in style and a prime candidate for blind tasting with someone who’s a snob about “old world” wine. I will absolutely be coming back to Haskell/Dombeya for a few cases before I leave South Africa - this is some of the most exciting wine I’ve tasted here, and the incredible chance to hang out with Rianie and Louis made it hands-down my best day in South Africa yet.