My First Day on the Job

Monday, my first day at De Toren, was fantastic with a good introduction to the estate before harvest began. First Albie showed me around the tiny but beautiful tasting room, cellar and barrel room, then assistant winemaker Charles had me help him and his staff take some vineyard samples. They are doing a project with a local college where they have certain blocks regularly irrigated (the rest of the vineyard is irrigated minimally according to an advanced system––more on that in a bit) and blocks with lateral shoots removed as an experiment. 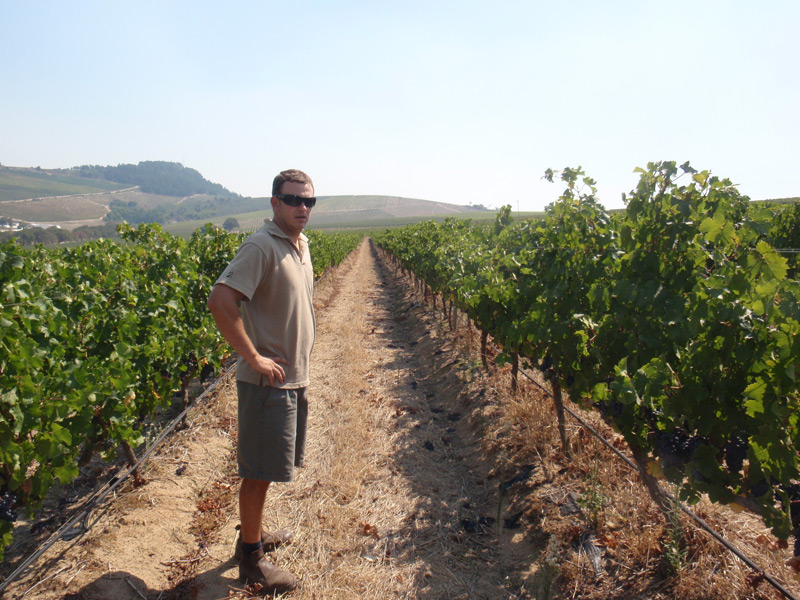 The rest of the day was spent cleaning the sorting conveyor and crusher/destemmer (there’s nothing better than power washing on a hot South Africa day). It’s already obvious that the sorting process here is much, much more elaborate than anything I’ve seen, with three conveyors and two vibrating sorting tables for up to twenty people to sit and sort.

In the afternoon, Ernest Manuel, the viticulturist and one of my new favorite people, pulled up in his bakkie and invited me to hop in and “see what it’s all about.” Between him, Charles, Albie, and Emil (the very hands-on owner), the passion and attention to detail at De Toren is obviously a cut above anything I’ve ever seen. Ernest explained that he is inoculating the soil (De Toren’s vineyards are notable for a great diversity of soil types, even within the same block, which Ernst describes as “bloody difficult” but ultimately “all about using the right clones.”) with 2% organic compost which they get from grape skins and plant rests to help them return microorganisms to the soil that were eradicated during the war era. Bomb building caused the soil to become heavy with nitrates and Ernest wants to return it back to a sustainable state on its own, and he finds that the compost is helping.

Ernest showed me amazing infrared images of the vineyard blocks which indicate vigor and to a lesser extent soil types and clones in each block; diversity is obvious which makes more work but also indicates more attention. He also uses a pressure bomb, which I’ll explain in the next post, to monitor how hard the plants are struggling and make sure he irrigates as minimally as possible. He’s absolutely meticulous in his treatment of the different blocks, rows and clones.

His canopy isn’t heavy even on the hottest, highest blocks. “I find that if you expose the grapes to sun early in the season they get used to it,” he says, and the foliage and fruit look simply gorgeous at this stage. I was particularly impressed by the evenness of the ripening––all clusters looked incredibly even with few green or raisined spots. Still, this afternoon workers were thinning out “not nice” clusters in preparation for picking tomorrow. We will pick two blocks of merlot tomorrow.