In my ongoing attempt to drink my way through Stellenbosch, I’m visiting wine farms every chance I get, and a few of my recent tasting experiences have been bizarre enough to be post-worthy. From a springbok carpaccio lunch on top of a mountain to a garden that belongs on a Beatles album cover, it seems there’s no shortage of creativity––and weirdness––in the tasting rooms of Stellenbosch. 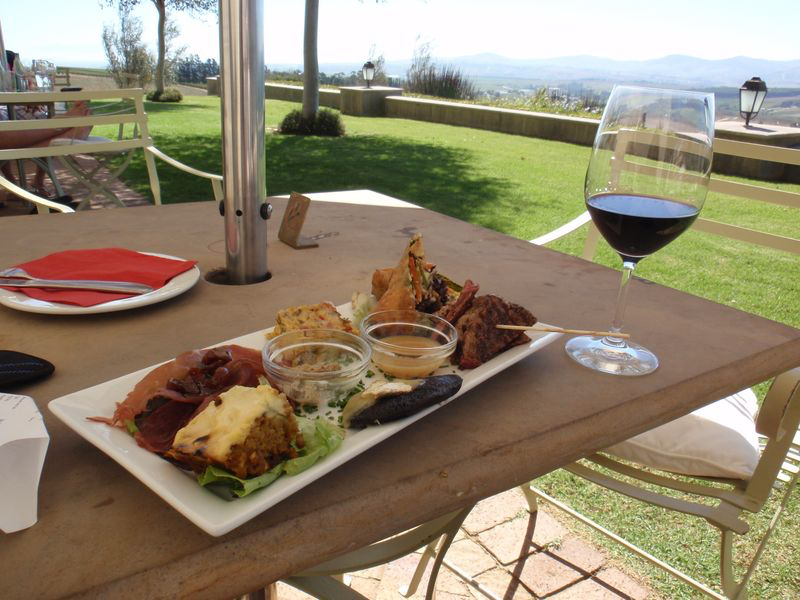 My friend Michelle had heard that Peter Falke had a cool tasting room, so we checked it out. The wine centre itself was beautiful enough but certainly nothing out of the ordinary; we were a little underwhelmed until our server asked, “Would you like to sit outside?” We stepped out into the garden and were greeted with what I can only describe as Tim Burton meets The Magical Mystery Tour. The gorgeous lawn, bordered by a rose garden, was full of huge umbrellas covering giant fluffy cushions in neon polka dot, stripes, and flowers. Huge twirly fixtures stuck in the grass like king-sized cocktail forks were topped with a big red cork with the PF logo; it took us a few minutes to realize they were giant corkscrews. We selected an umbrella and the server emerged from the wine centre (a good 100-yard walk––we sheepishly realized we’d chosen the farthest possible spot) with our first wine and two glasses. The glasses were another wonder: each one had a groove from rim to stem to aerate the wine as we swirled.

It was the most relaxing tasting experience I’ve ever had. We hung out on the comfy cushions sipping our wine (about a half-glass pour for each one!) and enjoying the sunshine. People-watching was great too; the tourists’ reactions to the lawn and the elaborate cushion selection process was highly entertaining. Combine this with tasty wine, including a dynamite sauvignon blanc and a sublime cab sauv rosé, which I purchased, and I’d say Peter Falke is one of my favorite tasting room experiences to date.

The next two strange experience were a direct result of the fact that because I don’t have a car, I do a lot of walking to wine farms. This is pretty much unheard of in Stellenbosch and it’s gotten me into trouble. Since Klein Zalze is right across the street from Blaauwklippen I thought walking was a no-brainer. Not so much. I got to the security gate (every wine farm has one, with a boom and a guard) and identified myself. “I’m sorry,” said the guard, a young woman. “You’re not allowed to walk up to the tasting room. You have to be in a car.” I replied that I was an intern at Blaauwklippen, visiting from the U.S., and I was walking because I don’t have a car. “I’m sorry, you must be in a car,” she repeated.

Feeling a little like I was being punk’d, I tried a logical approach. “What do you suggest I do?” I asked. “I’m here to spend money, have some lunch, buy some wine. I’m sure your boss would rather have my business.” This went over like a lead balloon. “I will get in trouble,” the guard said, shaking her head emphatically. “You just don’t understand. This is not the U.S. This is South Africa.” I was completely exasperated, but something told me to hang in there. The guard asked me where I was from, and my response piqued her interest. She asked me if I had ever seen Mariah Carey in person. We chatted for about 20 minutes while she let in one car full of thirsty tasters after another. Finally, she sized me up one more time. “You’re very pretty,” she declared, gesturing to my curly hair, which apparently had been improved by the heat. “I’ll make a plan.” When the next car pulled up, two Germans in an Audi, she approached the window and smiled sweetly. “Gentlemen! Would you two like to escort this young lady to the tasting room?”

“With pleasure! Hop in!” they agreed, and for approximately a quarter mile I rode in an Audi for the first time in my life. As we drove away, the guard called out, “Please remember me! And next time you come bring me an American dollar!”

After this bizarre experience I needed a drink. The wines were delicious, especially the gorgeous chenin blanc and chardonnay. I had an amazing lunch in the restaurant: duck confit with a glass of merlot. The weirdness didn’t stop, however: I was served a butternut squash soup amuse-bouche in a shot glass and couldn’t figure out how to consume it; my server brought the gigantic chalkboard menu right to my table because they were out of menus; and a group of young Afrikaans men bounced over to me wanting a picture together because one of them had been to Las Vegas once.

A third unique wine tasting experience had me feeling like I should be carrying a stick with a bandanna full of belongings tied to the top when I go wine tasting from now on. I left Guardian Peak on Saturday afternoon after less-than-awesome service with a mind to visit its more highbrow sister winery Ernie Els, just down the street according to my Stellenbosch Wine Route map.

The past few weekends temperatures have climbed into the Fahrenheit triple digits, and this day was no exception. As I plodded along the brick road, taking in the magnificent mountains around me, I began to realize three things. There wasn’t a tree or speck of shade in sight along the road. I had failed to bring sunscreen or a water bottle. I had seen signs for Ernie Els but I had been walking for 20 minutes and still couldn’t see the tasting room.

It’s common for wine farms to have driveways that wind up the mountain for three kilometers or more. Turns out Ernie Els is one of them.

After 45 minutes of walking in direct sunlight in sandals with a bottle of wine, a camera and a purse in tow, I saw a fountain and fish pond at the top of the hill. I feared for my sanity, thinking it was a mirage, but I had arrived at the wine centre. The concerned servers greeted me with a sympathetic “Ag, shame!” when I told them how far I’d walked, and loaded me up with water before my tasting. Once I recovered I realized I was nearly at the top of a mountain, and the tasting room opened to an incredible view of the whole of Stellenbosch. A guitarist played upgraded versions of John Mayer songs on the patio overlooking the mountainside. It was absolutely beautiful.

I loved the wines, the highlight of which was the Els-Engelbrecht red blend, a collaboration between Ernie Els and Rust en Vrede winemaker Jan Engelbrecht. Craving some fuel I opted for the interesting-sounding “safari platter.” It was one of the most interesting dishes I’ve had here: springbok carpaccio with fig glaze, bobotie, and biltong spring rolls. With a glass of their 2004 Bordeaux-style blend, the meal was well worth the hike.