I’ve woken up in the wee hours of the morning not once, but twice now, horrified that I’d forgotten to check the sugar level on the zinfandel. I have a possibly permanent tan on my feet in the shape of the Keens I wear every day. My back, feet, and shoulders are in constant pain, there’s never enough beer in the fridge, and I actually went to bed at 9:30 the other night for the first time since I was maybe eight years old.

Yeah, I think it’s safe to say harvest is in full swing.

As of today we’ve officially entered the craziest part of the harvest; the bulk of our crop will be picked in the next two weeks and the cellar is already getting full of tanks that need to be pumped over and analyzed for temperature and Balling twice a day (the latter is the exclusive job of yours truly, hence the odd nightmares). After a few weeks in a row of 40+ temperatures, suddenly it seems like everything’s ready to be picked at the same time. We’re actually hiring a harvesting machine twice this week to help us get everything in on time.

Today we started at 5:00 with the rented harvester in one vineyard and our vineyard team in another. The goal: hand-pick ten tons of malbec while the machine noshes on 40 tons of cabernet sauvignon, and then crush it all before dark. Let’s just say we were all a little crazy by the end of the day.

But at Blaauwklippen even marathon days like this one have room for fun. Rolf brought in a traditional German onion cake, homemade by his wife, for us to try with the customary glass of white must at lunchtime. Though our viognier is nearly finished at 2.9 Balling, it tasted great with the toasted onions, ham, and quiche-like filling, confirming my long-standing belief that when the Germans combine meat, onions and alcohol the results are magical.

When you’re working with a machine harvester rather than hand-pickers, a major drawback is the inability of the machine to sort what goes into the bins. When the bins arrived the grapes looked just fine, but we were greeted with some unique “terroir”: a managerie of African wildlife in the form of dozens of species of creepy-crawlies. Being the kind of girl who runs away from bugs only in order to get her camera, I took full advantage of the situation and reverted to my inner seven-year-old bug geek. 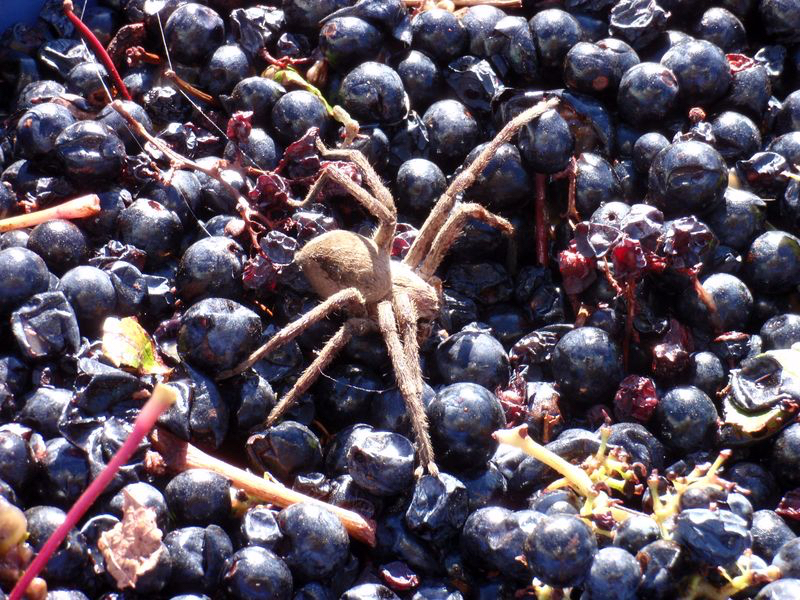 The star of the day was a baboon spider the size of a tennis ball. Similar to a tarantula and in fact in the same family, its body looked more like two coconuts than the soft and furry North American spider. My cellar buddies were tickled pink to watch me remove the spider from the bin with a shovel; only afterwards did they feel the need to inform me that baboon spiders are more venomous and pack a more painful punch than their North American brethren.

In addition to the spider there were grasshoppers of all colors and sizes, a tiny and terrified mole which we rescued, the fattest caterpillar I’ve ever seen, and my childhood favorite: a praying mantis, known in South Africa as a “Hottentot God”. Fortunately, despite bees landing on me constantly, a mantis attaching itself to my shoe for hours, and the spider incident, I survived the day with nothing but a few mosquito bites. On a final note, Rolf insisted that I add this disclaimer: these bugs do NOT end up in the wine! Any that make it as far as the crusher are removed during destemming, several rounds of racking, and filtration.