The first grapes came in at 9 a.m., huge purple clusters that were both juicy-sweet and a bit tangy to the taste. Instead of half-ton bins these arrived in small crates which we tossed one by one straight into the press; these grapes were VIPs, receiving a gentle whole-cluster press rather than the usual crushing. As we lugged crate after crate up a makeshift staircase and dumped it into the press under the blistering sun, knowing we had a 14-hour day ahead of us, Rolf shouted, “smile, guys! This is one of our most important wines!” 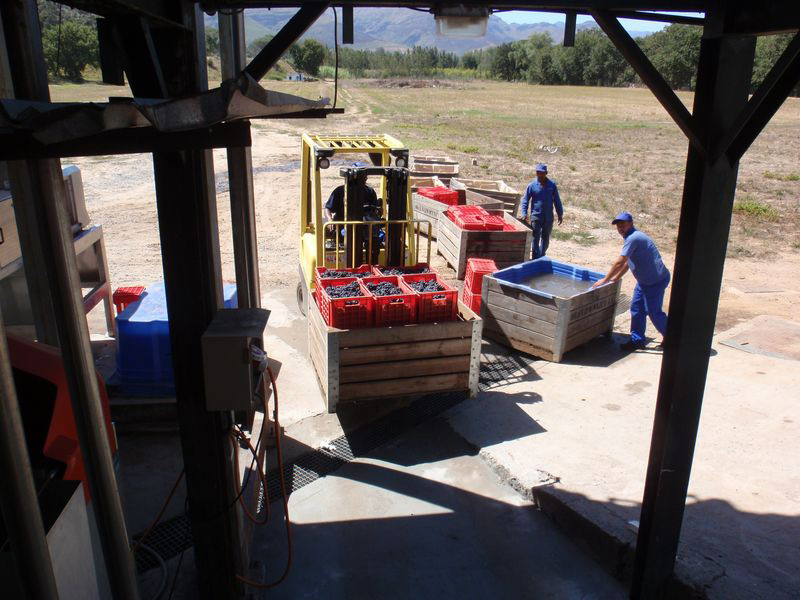 We weren’t making cabernet, or a nice late harvest dessert wine, or champagne. No, this was White Zinfandel Day.

Offer American wine geeks a glass of white zinfandel and they’ll most likely laugh, snort incredulously, or run the opposite direction. The sweet, super cheap zinfandel incarnation that gave “blush” wine a bad name in the U.S. is like the most ditzy cheerleader at your high school: popular enough, but probably not destined for greatness. But South Africa, with its experimental, up-and-coming atmosphere, huge number dynamic young winemakers from all over the world, and recent explosion of high-quality rosé wines, is the perfect environment to reinvent this maligned style. That’s exactly what Rolf has done.

On my first day at Blaauwklippen Rolf and Albert took us to lunch at the Blaauwklippen restaurant and suggested we try a glass of white zinfandel. I had to hide my disappointment, but when I tasted the wine I realized immediately that this was no boxed wine: our white zinfandel is absolutely lovely. With a refreshing summery nose of strawberries and star fruit, a snappy crisp finish, and a gorgeous hibiscus color, it’s a serious wine that sells for about US$15 – rather high for a South African white. When I mentioned this wine to my roommate Erik, who worked in the cellar last year, he chuckled. “Just wait for White Zinfandel day during harvest – it’s the longest day of the season,” he said. “That wine will kick your ass.”

Our white zinfandel, which we call White Zinfandel Blanc de Noir on the label to differentiate from the American version, is time-consuming because it has to be pressed immediately; we can’t just dump it in the crusher, pump it to a tank, and let it sit for a few days. Because it’s a rosé we want minimal skin contact (so it won’t draw too much color or tannin from the skins) so we put whole clusters rather than crushed grapes into the press. But first, we needed a whole crate crushed for juice so we could analyze the sugar and acidity. I was given the absolutely wonderful job of crushing the grapes with my feet. Albert knows me well enough to know that I love getting my hands (or feet) dirty: on a hot day standing in a bin of cool grape juice feeling the berries explode between my toes was fantastic.

When we analyzed the juice, our sugar was at 23 Balling and our TA was 12.2 – quite high acidity for this hot region. Rolf was concerned about the pucker factor and wanted to deacidify, but when he gave samples to Christoph and me to taste we just shrugged and smiled. Being from cold-weather regions where nice acidity is the norm, we weren’t concerned and told Rolf he should wait as long as possible before removing acid. In our opinion, with this style too much acid is better than too little, but he’s the winemaker so we’ll see what he decides.

Blaauwklippen is the only wine farm in South Africa that makes a white zinfandel. “It’s something special that we do, it’s a curiosity, it’s something new for people to try,” says Rolf. I remarked to him that South African rosé in general is some of the best that I’ve ever had, and that it seems to be a style undergoing a renaissance here. Not only is it a style that winemakers take very seriously, it’s a chance for creativity: I’ve tasted wonderful rosé from mourvedre, cab franc, cab sauv, pinotage, and petit verdot here, the highlight being Peter Falke’s 100% cab sauv whole-cluster-pressed example, which has a gorgeous honey apricot nose and delectably delicate palate. The perfect picnic wine, good South African rosé is complex, lively, edgy, and uniquely refreshing on a hot day. “Stylistically rosé has wonderful potential,” Rolf says. “Especially with the younger generation who are more willing to experiment and try something new, people are finding it can be a very nice wine.”

White Zinfandel Day did indeed kick my ass––after hauling 40 lb crates into a press, shoveling the pressed clusters of skins into a truck, and repeating twice, we got home after a 14-hour day with aching backs and legs. As I stumbled home picking grape skins out of my hair and collapsed in bed, I thought of the number of times I’ve made fun of white zin in my life, and decided that karma had caught up with me.