My first week at Blaauwklippen and I’m completely in awe. There are mountains literally surrounding the winery, the air smells like a mixture of beach and tropical flowers, and the view of rolling hills covered with vineyards is absolutely breathtaking. I’m staying at the Jonkershuis, a very old house on the property with four bedrooms, a kitchen, and one shower. 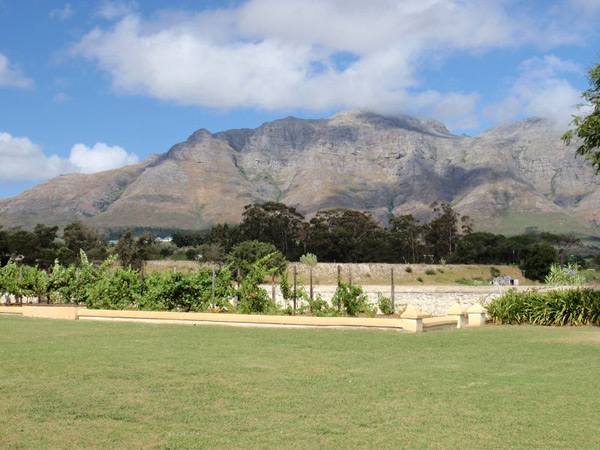 My roommates are four boys. There’s Christoph, a German wine student and my fellow cellar intern, and three hospitality students working in the Blaauwklippen restaurant: Glenn from India, Yves from Switzerland, and Erik from Germany.

I received a warm welcome from Yves––the only person awake when I arrived at the house at midnight––which included my first African beer, the Namibian Tafel Lager. Smooth and surprisingly malty, it hit the spot after my long flight. Since then I’ve also discovered South Africa’s Castle Milk Stout, an absolute wealth of amazing wine, and the ultimate South African tradition: braai. Like barbecue but better, it involves slow roasting one or many kinds of meat, often on a spit, with special seasonings over friends, drinks, a summer sunset, and great conversation. I’ve had no fewer than four since I’ve been here!

I’m discovering that South Africans are nothing if not welcoming: this weekend I was invited to two wine parties, one at Slaley and another at Dombeya. Highlights included doing shots of Springbok, which is Amarula cream liqueur and peppermint schnapps, layered to look like the rugby colors, with a bunch of people I’d just met with Afrikaans music on the box while they bent over backwards giving me tips on how best to enjoy the country; riding up a mountain piled into the back of a pickup truck to watch a sunset over an incredible vineyard scene; and trying incredible wines like Dombeya’s 2008 chardonnay and Slaley’s 2003 shiraz while talking about them with the winemakers. I also got to meet folks from Black Pearl, Klein Zalze, and Warwick––how amazing to be able to sit around and talk wine with so many passionate people. Heaven.

The cellar itself is a cakewalk at this point, since we won’t start picking till the second week of February. I’m cleaning tanks, doing some random filtering and bottling, and scrubbing things mostly, all while chatting with our gregarious kellergeister (“cellar ghost”), Leon. He’s a wealth of information on everything from South African politics and society to music and food, and a pleasure to work with. The real craziness, of course, will start in a couple weeks, when we’ll pick about 400 acres by hand over a period of three months. Until then, I’m settling in, making friends, and eating lots of braai.